An earthquake of a magnitude of 6.9 shok the people of Taskimalaya on Friday, December 15th 2017. The epicenter 6 km from the city centre of  was measured at 107 kilometers depth, killed four people, displaced over 200 and causing severe damage to over 1500 buildings.

President Director Mr. Adji Gunawan noted the funds were used for clothing and financial assistance for the victims. 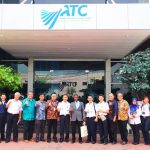