CAS Group through its subsidiaries; JAS facilitated the return of West Java Governor’s Son’s Body of Ridwan Kamil, Emeril Khan Mumtadz or Eril who was found at the Engehalde Dam in Bern on Wednesday, June 8, 2022.

JAS was responsible for the unloading of Eril’s body which was then immediately taken to the CGK Cargo Terminal before being taken to Bandung, West Java.

Previously, JAS had also coordinated with the airport authorities, the police, Angkasa Pura 2 and the family of Governor Ridwan Kamil in the process of returning Eril’s body to Indonesia. 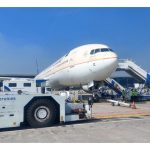