On April 20th, 2018 located in Malang, East Java, PT Cardig Aero Service Tbk (CAS Group) has conducted Corporate Social Responsibility (CSR) activities in 2 (two) schools, and they were SMK Penerbangan (Aviation) and SMP Angkasa, Singosari, Malang, East Java. Opened with a drumband from SMK Penerbangan Singosari , welcoming the arrival of an entourage of employees and all the management and business units of CAS Group.

The students of SMK Penerbangan and SMP Angkasa also got motivation classes from Mr. Ricko Sugyanto – Deputy Director of Corporate Affairs & Human Capital CAS Group. Then continued with remarks from Mr. Diono Nurjadin as President Director of CAS Group for the outstanding hospitality from the school principles and the all of the students, hopefully this CSR program will continue in the future in accordance with the values ​​of CAS Group.

At the end of the event, the CAS Group symbolically donated 30 (thirty) computer desks to SMK Penerbangan as well as donations for the renovation of school toilet facilities for SMP Angkasa. The donation was given by Mr. Radianto Kusumo as Group Managing Director & Group COO CAS Group to the Principal of SMK Penerbangan and SMP Angkasa.

Colonel Pnb Andi Wijaya, S. Sos as the Commander of the Air Force Base (Lanud) Abdulrachman Saleh Malang who also attended during the day, closed the event of CAS Group CSR in both schools. At the end, all CAS Group’s management toured the school to see facilities for students at SMK Singosari, Malang, East Java. 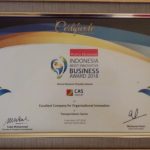 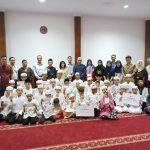